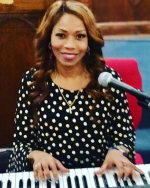 Minister LaContiss Briscoe, often known as Connie, is a Baltimore, Maryland native. As one of the associate ministers at Liberty Community Church, she also serves as the church’s Minister of Music.

Her expertise in the music ministry has afforded her the opportunity to minister through song for over 32 years in various states. Minister Connie heard the call to become a minister of the gospel and became a licensed missionary in the Churches of God in Christ. After being diligent in her ministerial training and studies, her pastor and natural father, Elder Lazarus Jones, gave her the Official Ministers Handbook in October 2015 and officially gave her the title of “Minister Connie.”

Minister Connie can be seen performing in theatre, on the show, Blessed and Talented Soul Ministries, sharing her talent with the Salem United Methodist Church’s Praise Band and assisting with York County Pennsylvania’s Men on a Mission male singing group.

Minister Connie is considered a “woman of worship!” She is committed to share the gospel and encouraging others to be strong and powerful people of God! Her anchor scripture for 2016 is Isaiah 40:31, “…but those who hope in the Lord will renew their strength. They will soar on wings like eagles, they will run and not grow weary, they will walk and not be faint.”