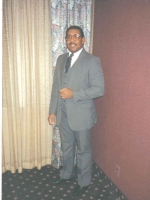 Pastor Lazarus Jones is undeniably one of the most dedicated, sincere, and committed pastors of all time. Not only does he practice what he preaches, he is a kind and generous man who will not mind giving the shirt off his back to help someone in need or by giving up his last dollar for the causes of Christ. He’s the type to offer a kind word or praise to someone in need of encouragement. He’s not ashamed of his convictions and will boldly stand up and proclaim Jesus everywhere he goes; he has faithfully served his God and community for over thirty years.

Pastor Lazarus Jones was born in a religious family where his mother, the late Rosa Lee Jones and his father, the late Willie Lee Jones were both preachers, so he was already predestined to carry on the family legacy. He was the second child of five children, born and raised in Baltimore, Maryland where he received his formal and higher education, ministerial licensing, career trainings and various other scholarly accomplishments by attending various Baltimore City Public Schools, bible colleges, trade schools and other scholastic institutions. Since he was raised in the church, he began to preach at a young age, he remained an active member throughout his adult life at the Greater Hope C.O.G.I.C. (Formerly Jones Temple C.O.G.I.C.) and served in numerous capacities such as: deacon, preacher, adjutant, radio broadcast coordinator, chauffeur, janitor and notably “Trustee”. At age 21, he married his wife of 45 years, Mary Lee, whom the Lord has called home to heaven in January 2010, started a family, and remained faithful in the church until he heard the voice of the Lord for him to accompany his wife to a higher calling.

It was Sunday, June 14, 1981, when he along with his wife Evangelist Jones  formed the Liberty Community Church of God in Christ. Following the opening of the church, Pastor Jones made Maryland jurisdictional history by being the 1st and only pastor in the Greater Maryland Jurisdiction ever to be ordained by a presiding international bishop of the Church of God in Christ.  Bishop Louis H. Ford was the presiding and officiating international bishop at the time, was invited to preach during the Spring Worker’s Meeting Conference (March 1982). It was that particular night when God spoke to Bishop Ford as he inquired about a “young pastor”; singled out and called Pastor Jones and his wife up front and decided to ordain Pastor Jones officially as elder in an unplanned  “on-the-spot” ceremony and encouraged the two of them to continue to go forth in the strength of the Lord.

From that time on, opportunities allowed for Pastor Jones to pursue higher education in pastoral ministry, studies of the bible and other religious courses at various bible colleges and other institutions where Pastor Jones continued and graduated at the top of his class. As a result, marriages, baptisms, and other exciting and celebratory events evolved at the church. Pastor Jones along with Evangelist Mary Lee Jones launched radio broadcast ministries throughout the 1980s- 1990s, hosted street ministries, outreach centers and is currently sponsoring the gospel show “Blessed and Talented Soul Ministries” which is airs on Facebook and  televised on WMAR-  Channel 2 News.

By doing so, thousands can hear the good news of the gospel preached over the air, land, TV, prisons, Internet and overseas.

As previously mentioned, Pastor Jones is dedicated and serious about his calling. He rarely ever missed a Sunday from his pulpit with the exception of one time in March 2005, when he suffered a massive stroke and was hospitalized for over a week. He miraculously recovered and was back in the pulpit the following Sunday, preaching and exalting Christ like never before. After the passing of his wife Evangelist Mary Lee Jones of 45 years, he recently re-married in March 2011 to Ms. Glenda Pilgrim.

To this day, the church continues to outreach and serve in the communities which have impacted so many lives throughout the state of Maryland and beyond. Liberty Community church has remained steadfast and has weathered the storms of life because of the strong and influential leadership of Pastor Lazarus Jones and the late Evangelist Mary Lee Jones. Thank God for the legacy which is continuing throughout this day and will continue for another thirty or more years to come.