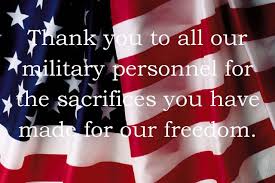 In the USA, Veterans Day is officially observed on November 11th. This day is the anniversary of the signing of the armistice, which ended the World War I hostilities between the Allied nations and Germany in 1918. Veterans are thanked for their services to the United States on Veterans Day.

Veterans Day is intended to honor and thank all military personnel who served the United States in all wars, particularly living veterans. It is marked by parades and church services and in many places the American flag is hung at half-mast.